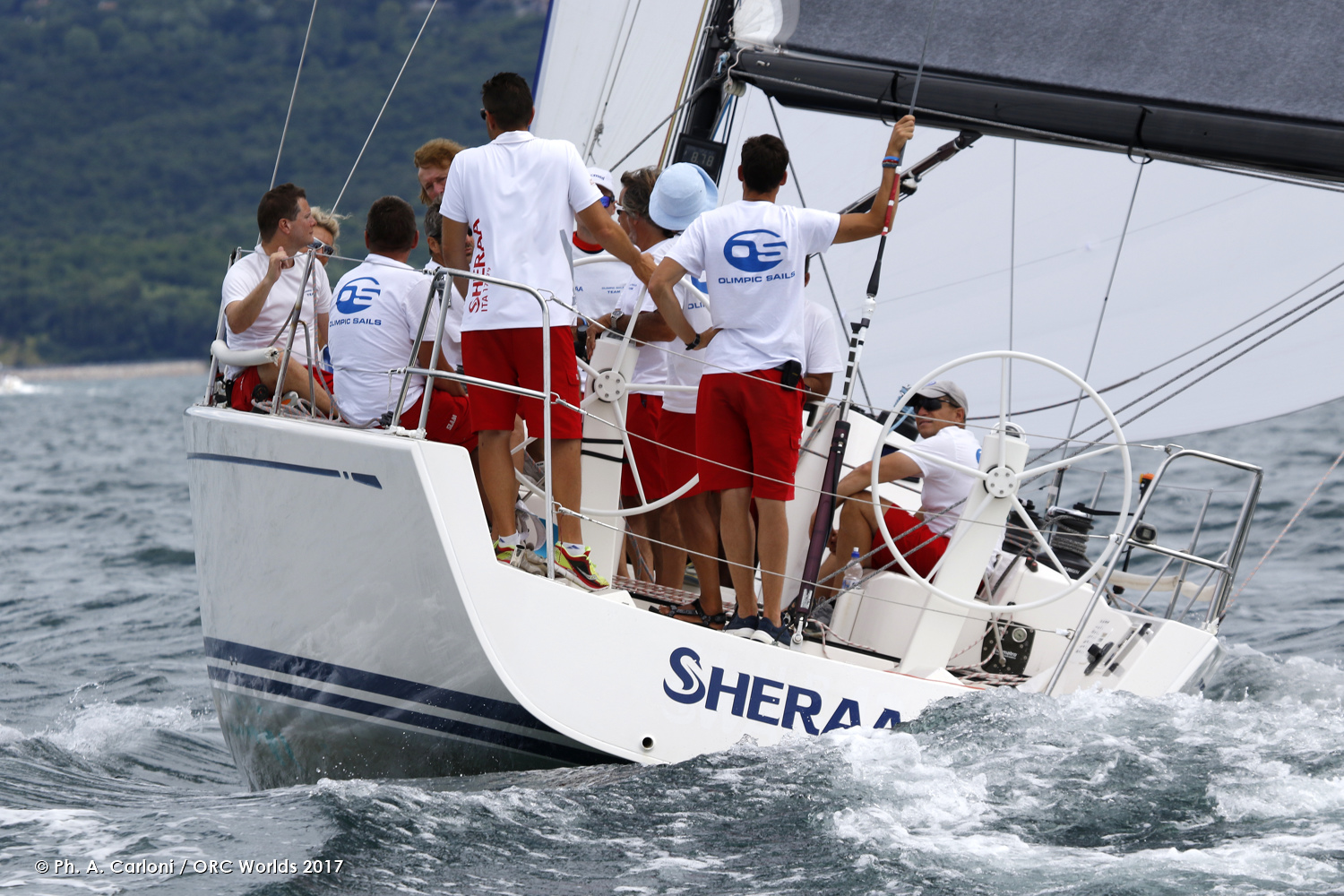 Trieste, ITA – Sometimes offshore racing can be grueling, not for too much wind but for too little. In conditions that yesterday and last night tried the patience of both competitors and the Race Committee, today the fleet of 116 teams finally limped across the finish line near the base venue at Porto San Rocco to complete the first phase of competition at the ORC Worlds Trieste 2017. Winds were light and got lighter on and off throughout the day and night as teams in three classes made slow progress on their respective courses laid out in the Gulf of Trieste with a turn south down the Slovenian and Croatian coasts, and back.

While the races were difficult in these conditions, completion means that if the conditions persist through the remainder of the week race managers will have only four more races to complete to have a valid event under ORC Championship rules, and one of the two offshore races now scored may be discarded since all are equal to one point.

This will make some of the favorite teams coming into this competition pleased, since most may have done well in one race but not in the other, and the scoreboard contains many high point totals for these teams.

For example, defending Class A World Champion Feccia Rossa, Vadim Yakimenko’s TP 52 with the same Russo-French team that won a similar light-air championship in Copenhagen last year, looked strong to repeat the same with a win scored at the race first scoring gate of 51.4 miles for this class. But the slower boats overtook them on the final leg to the finish after 121 miles where Maurizio Poser’s Swan 42 Sheraa YCH from Italy took the win and Freccia had to settle for 12th.

Sheraa’s 5th in the first race puts them in a solid lead in Class A on 6 points, with Klaus Diederich’s Swan 45 Fever and an international crew that includes Volvo navigator Wouter Verbraak and helmsman Andy Beadsworth tied with Vincenzo Onerato’s Cookson 50 Mascalzone Latino on 11 points each.

A British Olympian and veteran of numerous one design championship events, including those he’s won in the Etchells and Dragon classes, this is Beadsworth’s first-ever ORC Worlds. He commented before the race “This handicap racing is not easy! There are a lot of boats, its difficult to get good positions in the traffic. We’ll see how the week goes.”

In Class B there is a surprising leader, one who has not been among the local Italian or Baltic-based favorites going into the event but maybe now will have their rivals take notice. On the strength of their scores of 3-13, Sergey Kolesnikov’s mostly Russian team on his X-41 Technonicol leads Class B by only one point over Diego Zanco’s Croatian team on another X-41, Nube, who won the first race of 40.4 miles but fell to 16th after completing the entire long race of 104 miles. Skipper of Technonicol is Estonian pro sailor Mati Sepp, winner of the 2014 Baltic Match Cup among other titles. In third is Claudio Terrieri’s Italian Grand Soleil 43 BC Blue Sky.

The racing was no faster in Class C, yet the winner of the first race won by a margin of only 13 seconds after 9 hours of sailing the 31.5-mile course. This was last year’s Class C Silver medalist, Michael Mollman’s X-37 Hansen from Denmark. The long 99-mile race was won by Giuseppe Giuffre’s Italia 9.98 Low Noise II, with designer Matteo Polli on board. He was also on board when they won the 2015 World Championship in Barcelona, the debut performance of this now-proven design, a two-time winner of the Worlds.

“I think this will be a very tough week in Class C,” said Polli before the start yesterday. “There are many very good teams who have been racing and training hard to be here since the Italian teams had to earn their invitations with a limit placed on the number of local entries. Its impossible to predict, we will be fighting together all week.”

Yet in the lead in this class now is not a 9.98, but the reigning ORC European champion from Estonia, Aivar Tuulberg’s Arcona 340 Katariina II on the strength of scores of 3-2, a full 10 points ahead of Alessio Querin’s Farr 30 Mummy One-Lab Met, with Low Noise II in third.

Tomorrow inshore windward-leeward racing will start the second phase of the competition, with Classes A and C racing on a course area to the south of Porto San Rocco, and Class B by itself to the west. All teams will no doubt enjoy a quiet evening of rest tonight before the battle starts again tomorrow, with two races planned.

More info including live-streaming from the race courses, tracking from TracTrac, photos, videos and more at www.orcworlds2017.com.